On this blog page, author Mary C. Woolling posts an ongoing series of her essays showcasing the positives of life.

New essays are added often. You are cordially invited to become a regular reader. Also, please feel free to share this site with your family and friends via the âTell a Friendâ link, located in the right-hand column below.

Comments on Mary's essays are most welcome. Simply click on the âPost Commentsâ link appearing at the end of each essay, and share your thoughts.

A Prayer in Spring

Oh, give us pleasure in the flowers to-day;
And give us not to think so far away
As the uncertain harvest; keep us here
All simply in the springing of the year.

Oh, give us pleasure in the orchard white,
Like nothing else by day, like ghosts by night;
And make us happy in the happy bees,
The swarm dilating round the perfect trees.

And make us happy in the darting bird
That suddenly above the bees is heard,
The meteor that thrusts in with needle bill,
And off a blossom in mid air stands still.

For this is love and nothing else is love,
The which it is reserved for God above
To sanctify to what far ends He will,
But which it only needs that we fulfill.

âToday is the tomorrow you worried about yesterday, and all is well,” my grandfather used to say. In his long lifetime, heâd learned that most of what we fret about never comes to pass. We waste so much time and wear ourselves out fearing the worst, instead of enjoying the present moment and trusting in God for the future. It behooves us all to keep in mind that weâre not in control; our loving Heavenly Father is. And to remember that, in any trouble we encounter, He is with us, ready and willing to lead us through. The trick is learning to let go and allow Him to do so.

The Reverend Robert H. Schuller, famous televangelist and pastor, once spoke of an experience he had that clearly illustrated the reward to be gained in letting go of worries. As I recall his story, one day while traveling, he found himself lugging two heavy suitcases through a huge airport, as he rushed to his departure gate. The distance to the gate was very long, and the time allowed for traversing it very short. On finally reaching the far-off gate and putting down the suitcases, he exclaimed to the agent, âWow! What a relief! I didnât realize how heavy my burden was until I set it down.â When we can set down our burdens, confidently leaving them in Godâs hands, we, too, are rewarded with the welcome feeling of a huge weight lifted from our shoulders, a sweet release from our heavy load.

Iâm a master worrier. I admit it, and I venture to say many of you, my dear Readers, worry, too. I stew about my problems and I pray about my problems, offering them up to God. But after completing my prayers, it seems, I often take back my concerns and worry some more. Sound familiar? The other day I was speaking with a friend about this ongoing challenge of mine. She offered this suggestion: âMary, instead of you being a master of your worries, why not give your worries to the Master?â

Sound advice, with which the American poet Robert Frost would have undoubtedly agreed. In his A Prayer in Spring, printed above, Mr. Frost encouraged us not to project ourselves into that âuncertain harvestâ of the future but instead to focus fully on today with all of its many pleasures, assured in the knowledge that God has every one of our tomorrows safely in His hands.

âThis is the day that the Lord has made. Let us rejoice and be glad in it,â wrote the Psalmist. And what a glorious April day in which to be joyful and glad! The sources of happiness are all around us. Feel the warmth of the sunshine on your upturned face. Can you spy the emerging, tiny buds on the limbs of the trees? See the gently-opening petals of the beautiful flowers that have surfaced once again. Take a look at the grass underfoot. Overnight, as if by magic, it has suddenly turned to a lush, verdant green. Hush! Listen to the cheerful singing of the happy birds.

Today is the tomorrow we worried about yesterday, and all is well, for all is in Godâs hands. Let us rejoice today and trust in Him for tomorrow! 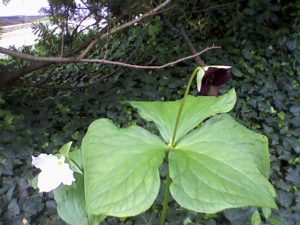 Uppermost in my mind during these past weeks of Lent has been a vivid memory from the day my beloved father passed away — Easter, 2017.

I will never forget the amazing gift of assurance that God provided to me that Sunday morning: two three-petal flowers (one pure white, the other dark red) suddenly appearing on the trillium plant that Dad had set out in the yard many years before.

Those sweet little wildflowers (photo above), nestled under the shade of a hicks yew bush north of the driveway, were just waiting to be found. Had it only been the dark red flower springing up from the bed of English ivy, this sign of hope could easily have been missed; but the pure white flower set off by that lush sea of green could never have been overlooked. It stood out as a shining beacon! Coincidence that both blossoms would just happen to appear right before my eyes on the morning of my father’s passing? I don’t think so!

Perfectly timed for Easter, the red trillium was a beautiful reminder of the redeeming blood of Christ; the white trillium, of His glorious resurrection and the promise of eternal life.

Blooming there in the yard, side-by-side, on that very day, those two little flowers were also a powerful sign for me that the reunion I was hoping and praying my parents were enjoying was indeed taking place. A “God-sign” that I believe was sent to assure me that my father had awakened in Heaven that Easter Sunday morning, and my mother was right there to greet him. She had been waiting for him for 14 years. Inseparable in life, now together again at last, they were safe and secure in God’s loving arms. An undeniable feeling of peace eased my questioning, aching heart that morning. The memory still comforts me today.

You go nowhere by accident.
Wherever you go, God is sending you.
Wherever you are, God puts you there.
He has a purpose in your life.
Christ who indwells you has something He wants to do through you where you are.
Believe this.
Trust this.
Go, in His grace and love and power.

Simon did not go to Jerusalem that day by accident. Though he did not realize it at the time, God had sent the strong and able Simon on a special assignment.

As far as Simon knew, he had simply traveled to the Holy City from his hometown of Cyrene on the African coast to attend the Passover. But on that pivotal Friday, he suddenly found himself placed at the forefront of a momentous event â an event that not only changed him forever but also forever changed the world.

Entering the city, Simon observed an angry, jeering mob, encircled by Roman soldiers, on its way to a public execution. In the center of the crowd was a Man carrying a large, heavy, wooden cross. Jesus, exhausted from scourging and beatings and weighed down by His cumbersome burden, suddenly stumbled and fell to the ground. The Scriptures tell us that the Roman soldiers, irritated by this delay, âcompelled Simon, a Cyrenian, who passed by . . . to bear His crossâ (Mark 15:21).

As Simon reached out his massive, muscular arms and large, capable hands to take up Jesusâ burden, the Lord looked into Simonâs eyes and into his heart. In an instant, the Cyrenian was transformed. No longer a lone and detached bystander but now a committed and compassionate helper, Simon proceeded to carry the cross, with Jesus walking along beside him.

From that moment on, Simon became a faithful follower of Christ, as did his family. Indeed, Simonâs sons, Alexander and Rufus, were later recognized as leaders of the early church.

Like Simon, we never know when we, too, may unexpectedly be thrust to the forefront of situations for Godâs purposes. How many times have we all had experiences in which we suddenly were called upon to do something to help another, and our efforts turned out to be just what that person needed at that particular time? And when we look back on the episode, we marvel at how differently things could have worked out, if we had not been right there . . . in that place . . . at that very moment . . . to help. We come to realize that we were at the center of a truly edifying experience. I don’t believe we were there by accident or coincidence. I believe it was all part of God’s plan.

In his benediction, printed above, former chaplain of the U.S. Senate, Dr. Richard Halverson seems to agree with my belief, saying no matter where we are in life or where we go, there’s a reason we are there. There’s a purpose. Godâs purpose. And when the time is right, that purpose is made evident to us. We are given a special, divine assignment.

This divine assignment might be as simple as helping a next-door neighbor who has suddenly become ill or frightened, by providing an encouraging note, a nutritious meal, or an uplifting book. Or, it might mean giving up a planned evening of fun activities and, instead, spending time with a lonely co-worker who is struggling with a problem and in need of a good listener. Or, it might even mean stepping into a daunting, new world of endeavor, one that carries with it much uncertainty, perhaps great risk, yet at the same time tremendous potential for good.

God has placed you where you are for a reason. He has a special assignment just for you, right where you are.

Itâs reassuring to remember that, should we hear Godâs call and accept our assignments, we will never go alone. As with the cross-bearing Simon of old, who bravely answered God’s call, Jesus will always be there, walking along beside us.

Collections of Mary's essays are now available in book form:

Joys of the Journey: An Offering of Essays

Brightening the Corners: Rays of Hope for Our World

To purchase your copies, visit www.herestolife.us